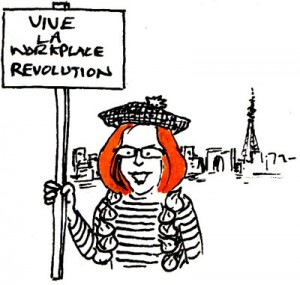 I think that the brave among us now have the opportunity to take charge of our own learning and experience of work. There’s so much past insight that can help us – and we’ve got each other. This post introduces the idea of patterns, themes that recur as times and contexts change, that are linked to satisfying work and effective, customer-focused performance. Obviously what you specifically need to know depends on what you need to do. Even so, I see ten themes as fundamental and so worth exploring.

A link to a set of McKinsey Quarterly articles dropped into my email inbox a few days ago. One of the articles in particular interested me. Next frontiers for lean is good, (although, I prefer ‘process innovation approaches’ rather than ‘lean’ since they are about much, much more than the elimination of waste).

The authors say that “despite lean’s trajectory, broad influence, and level of general familiarity among senior executives, it would be a mistake to think that it has reached its full potential.”

And that’s where I take issue with the article. General familiarity among senior executives? I don’t think so. Process innovation approaches haven’t reached anything like their potential. Why do I think that? The authors of the article say that understanding of lean has evolved into:

” a richer appreciation of the power of its underlying management disciplines: putting customers first by truly understanding what they need and then delivering it efficiently; enabling workers to contribute to their fullest potential; constantly searching for better ways of working; and giving meaning to work by connecting a company’s strategy and goals in a clear, coherent way across the organization..”

It’s because I don’t see nearly enough progress on the latter part of their description of what makes the lean philosophy effective. This isn’t the first time McKinsey consultants have re-visited lean.

‘From lean to lasting: Making operational improvements stick’ is an article in edition Number 1 of The McKinsey Quarterly in 2009. It’s about the challenges of “mastering lean’s softer side”, which “forces all employees to commit themselves to new ways of thinking and working.”

According to the article, companies tend to bring in change agents to lead lean programs and the authors give a number of reasons – excuses – why this might be understandable but wrong. There’s no short-cut to investing in developing the necessary problem-solving and leadership skills of people of everyone, especially those doing fast-moving, operational work who may not previously have been exposed to the necessary problem-solving, leadership and political skills.

Smart Working: Creating the Next Wave is a book I had published last year. It’s about why foundation insights of customer-focused process innovation philosophies (yes, including lean) remain relevant for today’s increasingly complex, networked, distributed, flexible and mobile enterprises – and what to do about it. Part of the process of writing the book involved reviewing a sample of research studies on high performance work systems.

High-performance? Isn’t this just another meaningless buzz word? Maybe it is but there has been serious research over the years assessing the link between holistic, systemic approaches to designing workflows, supporting structures, cultures and employment relationships, and a range of business outcomes.

Among different definitions and indicators of high performance, one thing is consistent – that whole systems of leadership, learning and skills development underpin it.

This is what high performance means to me. What’s good for people is good for business. High-performance work systems give customers what they expect, while at the same time meeting the needs of the people who give them what they want through their combined efforts and skills. High-performance work systems are more the exception than the norm though, which is why I doubt a “level of general familiarity (of lean) among senior executives.”

I said in the Brave New World post that I recently took time out to try to make sense of how past insight can inform present action. I think I see ten high-performance patterns, themes that recur as time and contexts change, which were relevant in the past and that remain critical in developing future-focused skills for increasingly complex business contexts.

All the patterns were evident to some extent in the past. Some like the importance of our informal social relationships to how we experience work go back as far as the Hawthorne studies in the 1920s and 1930s. Other patterns, like customer focus, began to emerge strongly in the shift to participative, process innovation approaches to work design in manufacturing about thirty years ago.

What’s new now is the potential for each pattern to reformulate and spread through networks, as people connect, pass on, adapt, and refine ideas. Here’s a link to a summary of the patterns if you’d like to know what’s coming in the next ten posts, where I’ll explore each of the patterns in a bit more detail and say why they remain relevant today.