A bias to learning from action and experience is growing in my network. Nothing wrong with that. It’s what I advocate with Tiny Triumphs – do something and learn from the experience. Learning through doing things is not the only way we learn, though.

We also learn from thinking critically (asking questions), from listening, from conversations, from watching what other people do and copying them, from reading about the ideas that other people have – and reflecting on what we see and hear, on our own or together with others.

There’s a shift happening in corporate Learning and Development at the moment, from courses and training to performance support. I think in the understandable focus on what’s happening here and now, there might be a chance that accumulated knowledge is overlooked. Why does that matter? Or does it? I think it does.

The current focus on performance support needs to include resources that encourage people to step back and think about effectiveness – doing the right thing, rather than doing the wrong thing right. Insight over decades could give anyone looking to support the shift to performance support a head start in doing this.

Ideas from researchers and theorists in different knowledge disciplines can be built into practical guidance. This introductory post (the first of two parts) tries to explain why I think insights from social psychology are particularly relevant.

What is social learning? For Julian Stoddard, it is about creating organisational learning journeys that incorporate:

Harold Jarche’s ‘Personal Knowledge Mastery’ adds another dimension, I think. This is self-determined social learning instigated by personal choice, not organisational expectation, but that can also be applied within a work context.

For me, social learning is learning together and from each other in whatever form that takes – whether through reading (paying attention to what someone is saying in print), talking, listening, doing something together, or through quiet observation and then modelling what someone else is doing.

Fundamental insights from four social psychologists, Karl Weick, Albert Bandura, Edward Deci and Richard Ryan, give us clues on things to think about if we want to try to create conditions that make effective social learning more likely to occur than not.

You might object that these thinkers are from another time and that their insights are no longer relevant for our connected age. You’d be wrong. Much of what thinkers like Esko Kilpi are saying and writing about now has roots in Weick’s ground-breaking Social Psychology of Organizing – first edition 1969, second edition 1979.

We’ll start with Weick. He says in ‘Social Psychology’ that the essential unit of organising (who does what, and who with) is two people, whose social interactions generate patterns of outcomes over time. The two people adjust what they think and do in response to each other – well maybe they don’t, but they have the capability to do so.

The dynamics between just two people are complex; they are dynamic and unpredictable. Despite Google, Amazon, Facebook, and the rest collecting personal data to influence and predict our behavior, I still think people remain unpredictable at the level of person-to-person interaction. We can assess the likelihood of what people might think and do but can’t be sure.

Now add more people into the mix. Weick’s analysis of the possible alliances that can arise within and across groups that can form with just nine people was an eye-opener when I saw it (for another post). The patterns of interactions within and across groups generate the social environments that we operate in, which can unfold in physical spaces and now, of course, in digital spaces.

Not only are our relationships with other people complex, elements of who we are as individual people are complex. What we think and what we think we can do are not fixed; they evolve over time and with experience. The layers of complexity don’t stop there. These things are influenced by our social environments. At the same time, we can change our social environments by what we do. Bandura describes this process of mutual impact as ‘reciprocal determinism’.

What people do, or don’t do, depends partly on their sense of self-efficacy. If they believe they can, they can – and vice versa. This wee cartoon, in French, tweeted by Coralie Huché hits the nail on the head. It contrasts ‘power over’ and ‘power to’. If you don’t believe you have to power to, whatever it is has limiting power over you. 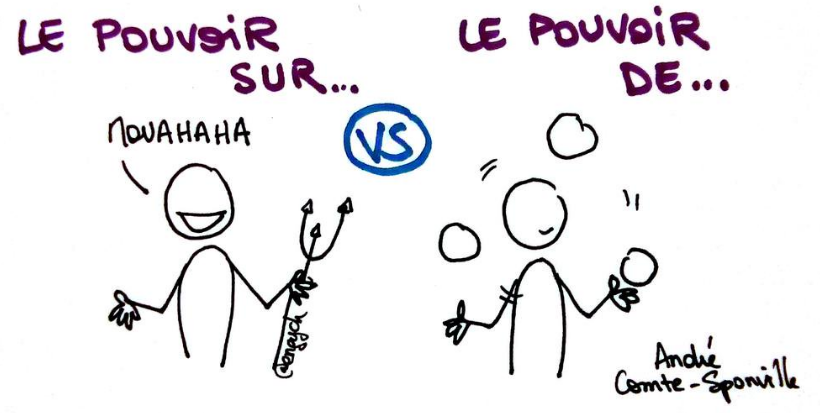 Dan Pink, in his book Drive, quotes Deci as saying that:

“Human beings have an inherent tendency to seek out novelty and challenges, to extend and exercise their capacities, to explore, and to learn.”

Their research over three decades suggests that people on the whole need opportunity to develop competence, they need autonomy, and they need relatedness. Pink promoted ‘Drive’ on the meme of autonomy, mastery, and purpose.

“But whether that aspect of our humanity emerges in our lives depends on whether the conditions around us support it.”

I think there’s more to it than that. I’m particularly interested in self-determined social learning. People now have the opportunity to develop work skills and capabilities for their own satisfaction. Just because we can, though, doesn’t mean that we will because:

How to overcome these things is worth thinking about because whether or not social learning is active in organisations depends on people participating willingly.

How could any of this be useful for someone trying to encourage people to learn together, and from each other, in an organisation?

That’s a big question since so much depends on context. The first step in creating conditions that encourage social learning are to understand:

Now you can think about:

Consider two hypothetical extremes. One is where informal helpfulness is already part of the organisational culture – problem-solving and knowledge-sharing is common practice. In this case, you might be looking to improve internal systems for capturing and communicating good stuff that is already happening. The culture in this example is underpinned by cooperative interactions among people who operate in strong informal networks, and who “seek out novelty and challenges” and “exercise their capacities, to explore, and to learn”.

The second example is where social learning might be a new concept for an organisation, a step towards changing a dominant culture that is resistant. Then you might be considering an experimental project as a demonstrator, in which case you might want to think about who you’d need to involve – allies, people you report to and so on. Besides the people involved in making the experiment happen, people doing the work, what might these influencers need?

How much of a barrier will the current culture present? What does it look like? Bandura and Weick reminds us of what is self-evident, really, which is that:

To what extent are governance policies effective in constraining coercive behavior in this organisation? Are the pressures that people experiencing too great for a social learning culture to seed – or are there pockets of willingness despite the pressures?

I said at the beginning of the post that I’d try to show why insights from social psychology are particularly relevant. They don’t give us easy answers, that’s for certain.

Social psychology researchers remind us of the fluidity, inter-dependence and complexity of social dynamics. Bandura in particular reminds us of the mutually-reinforcing influence of our social environments, which affects what we think, how we think, and how we behave with others.

We can also use what social psychology researchers propose to help us to think critically. Is Bandura right that we are not prisoners of our social environments? Do we have to recognise sometimes that some organisations are just not open to change? And does everyone “seek out novelty and challenges, to extend and exercise their capacities”?

How do we take account of the diversity of emotional and social needs that people have? Is it even possible? What to do then? Like I said, no easy answers.

Part Two of this introduces ten general themes to consider in supporting effective social learning. They make it more likely than not that social learning habits become embedded as part of an organisation’s culture.